Leadership: Start by being a leader

I once applied for a job that I was a little underqualified for. It was a head of development role, and although I’d been a senior developer for a while on paper, I’d only just moved up to being a technical lead.

In the interview, one of the interviewers posed the question to me: “Your leadership experience is not up to the standard of other candidates that we are interviewing. What steps are you going to take towards educating yourself about leadership?”

My answer was pretty simple. With all the self-confidence I could muster, I said “I plan on learning about leadership by being a leader.”

There were 3 interviewers. One smiled, one looked confused and one looked blank.

I then elaborated that although I hadn’t been in a technical lead role very long, I’d been acting as a lead inside that organisation for longer than that. And that I’d had leadership experience all through my life at school, in sports teams, etc.

I told them I’d read extensively about being a leader. Specifically, about software development team leadership and business leadership in general.

But I told them I didn’t think that mattered. I said that I felt true leadership started with being a leader.

The end of that interview story is that I got the job. I wasn’t hired as a Head of Development though; I was hired as a Senior Developer.

Eleven months later I was made Head of Development.

Five years after that, the interviewer that smiled at me asked me to be CEO of his company.

This article was originally published by one of BlueSky’s brands, Recruit Complete, written by Daniel Glynn.

Daniel Glynn
Daniel Glynn is the CEO of Recruit Complete, one of BlueSky's brands. Daniel has a significant background in software development, having been the company's Head of Development before being handed the role by Recruit Complete's founder. "What I have is a passion for building great software and solving complex problems. That’s why I love working at Recruit Complete." We are lucky to have Daniel's regular input and insights into his views on leadership, management and more on the BlueSky blog!
Recent Posts 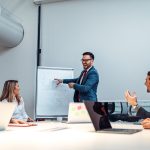 What is a leader?Leadership
This website uses cookies to help the website function, help us to understand how you interact with it, and provide the most relevant experience by remembering your preferences and repeat visits. By clicking “Accept”, you consent to the use of all cookies. You can manage cookies via the cookie settings.
RejectAccept
Manage consent

Performance cookies are used to understand and analyze the key performance indexes of the website which helps in delivering a better user experience for the visitors.

Analytical cookies are used to understand how visitors interact with the website. These cookies help provide information on metrics the number of visitors, bounce rate, traffic source, etc.

Advertisement cookies are used to provide visitors with relevant ads and marketing campaigns. These cookies track visitors across websites and collect information to provide customized ads.

Other uncategorized cookies are those that are being analyzed and have not been classified into a category as yet.

Save & Accept
Powered by